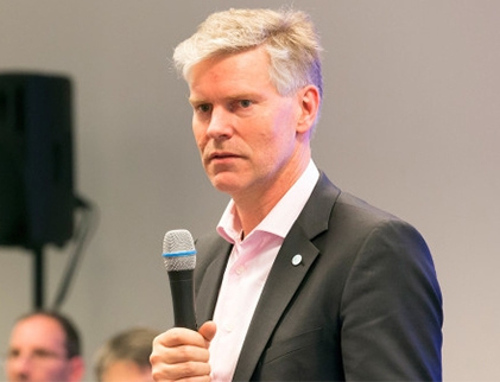 After the festive opening of the EIT Digital satellite co-location at CWI (Centrum Wiskunde & Informatica), we interviewed Prof. Willem Jonker, CEO at EIT Digital. During this conversation, we talked to Jonker about his view on the European scaleup ecosystem. “When a scaleup fails, it’s generally because of a lack of expertise.”

What’s the difference between a startup and a scaleup?

Jonker: “A scaleup wants to be an international player with a significant turnover, within a relatively small amount of time from the get-go. To be honest, I am more interested in companies who go for a significant turnover than the companies who go for a significant valuation. Startups, however, start really small and tend to focus a lot on the technology. A lot of the startups disappear, as they focus on a technology and eventually find that it is hard to scale it. You need big technology and a good sense of how desirable your technology really is. In other words, there has to be a market. Still, a lot of scaleups will fail. And that’s okay, but it shouldn’t happen because of obvious problems that you didn’t account for. Every scaleup once was a startup, but not every startup will become a scaleup.”

What are the biggest hurdles for scaleups to becoming successful?

Jonker: “A lot of people think that throwing enough money into a project will make it successful. However, I think that money isn’t the most important factor. When a scaleup fails, it’s generally because of a lack of expertise on how to systematically scale up in Europe. Another complexity is how fragmented the market in Europe is. To grow, European scaleups have to cross borders relatively quickly, since the home market is too small.”

To conclude, these are Jonker’s overall insights on the European scaleup ecosystem.

1) It’s not just about the money: get star players

As stated earlier, Jonker does not believe that money is the most important factor when trying to grow internationally as a scaleup. Scaleups generally fail because of a lack of expertise. Jonker has a few suggestions to deal with this problem. For instance, scaleups could hire experienced employees. Jonker: “You need skilled people, a lot of effort and an understanding of how serious the business is. This is especially important when building a deep technology scaleup. The best way to achieve these goals is hiring experienced people. When a soccer team wants to become better, the management buys some star players. So if you want to boost your scaleup, you have to hire some star employees.”

2) Start in your home market with a global mindset

“Europe has a relatively small home market. Combine this with a very fragmented international market, and it gets pretty complex to scale up. Yet it’s not impossible to accomplish. Companies need to cross borders fast and make sure that its home market becomes larger. To achieve this, you also need expertise.”

4) It’s not about the startups: use technologies that originate from universities

“When we started, we focused on startups too much. We thought “O, it is all about startups!” while instead it is all about scaleups. But by definition you have less scaleups than startups. The Netherlands could, for instance, improve by using more new technologies that originate from technical universities like TNO, and subsequently systematically scan these technologies based on potential. There are a lot of good universities in the Netherlands and there is a lot of potential. Who won the World Solar Challenge? One of our universities with their technology did (TU Delft, with Nuna9, ed.) and we should be proud of that.”

5) The digital market should be accelerated

6) There is a lack of digital skills and political understanding

“Also, we don’t have a political culture that’s very technology minded, when you compare it to Germany for instance. Also, there are only two ministers in Europe in the fields of digital affairs. This is a problem that should be addressed.”

7) It is all about scaling up

Finally, it is about learning skills on how to scale up. “There is a lot of money, but it should be turned into smart money by making very digital savvy investments. All these mentioned things are emerging in Europe, but digital innovation is going at an incredible pace.”